I say that nothing frightens me: How Boston Opera Collaborative changed my life

I’m writing this post today because of an upcoming event for a group dear to my heart.

Fun fact: I used to be president of an opera company. But we’ll get to that.

When I finished my Master of Music degree I had a lot going for me. My high notes had finally worked themselves out. My voice was still pretty. I knew a lot of people in the city. I was performing a fair amount. I was in pretty good shape.

But I didn’t have much stage experience, and I didn’t really know how I was going to get any. So when a few friends started up a small opera collaborative, I jumped on in, figuring I’d get to sing a little and get some time on stage.

I did my first show with them in the summer of 2006. I was one of the three Greek ladies in Iphigenie en Aulide. Everyone in the show had more experience than I did, so I watched them and picked up what I could.

I don't remember why we were spinning around in Act 2. Check out our big budget costumes. And my posture!

After that show I felt a little more confident. I could remember blocking and basic choreography! So that was good. I kept auditioning. Next show was La Boheme. The girl who was supposed to play my daughter never showed up so this choristers backstory was that she was crazy over a lost daughter. Dov’e Barbara??

A funny thing happened while we were working on La Boheme – I was asked to succeed the founding President. I didn’t want to, in face I was running for Public Relations Chair. I didn’t know anything about running an opera company? I hardly knew anything about opera? But just as I did at my first rehearsal, I put on a brave face and acted like I’d been there before.

I’m not going to go through the litany of shows I’ve done with them, although I’ll add some more pictures at the bottom. And I’m not going to write an impassioned love letter to my colleagues and friends like I did here.

And I’m going to ask you to support us. This weekend Boston Opera Collaborative participates in the Walk for Music and Arts with the goal of raising $11,000. This is an astronomical sum compared to our fundraising goals in our first few years, when I was president, and later public relations director.

We barely had a budget for staples when I first came on the scene, now we are in much better shape. But to keep doing what we’re doing we need the love and support of our community near and far. So if you feel like you can make a donation to this group that changed my life, that taught me not to be afraid, click here.

And as always, dear readers and friends, you have my affection and gratitude. 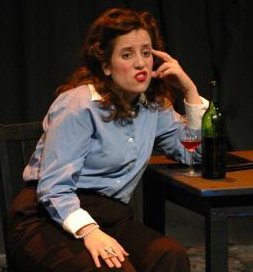 Don Giovanni, when I first discovered my guilty pleasure of stealing focus.

The Crucible - my creepiest and most rewarding artistic experience yet.

You’ll be able to see me in BOC’s summer production of Orpheus in the Underworld in July, as Cupid.

This entry was posted in BOC, Boston, friends, pictures, singing. Bookmark the permalink.

3 Responses to I say that nothing frightens me: How Boston Opera Collaborative changed my life