The curious incident of the chives in the night time

Posted on September 25, 2012 by margaretfelice

I walked out my back door this morning to a shocking sight. 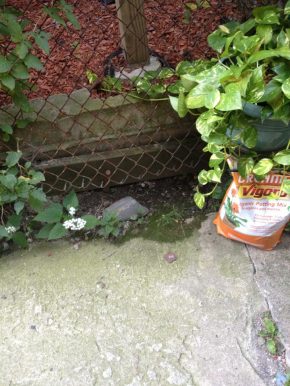 There were two plants here yesterday.

Shocking I say! My basil and chive plants, in cute matching pots, who go by the names of Bert and Ernie, have disappeared from my pathetic attempt at an urban garden. Big sister Bertha appears to be undisturbed.

I have a few hypotheses.

1. There is a plant version of DCF that comes to take herbs from bad parents.

I haven’t always been perfect, but I have managed to keep these two alive for TWO WHOLE MONTHS! Their sister cilantro turned brown in a week, but I swear she was dead when the guy sold her to me. I have pruned and watered and done all the right things, so if the plant police are filing charges, I plan to appeal.

2. Someone saw the forecast and brought them in.

It got down to the thirties in the suburbs last night, but we are right on the water, so we won’t worry about frost for at least another few weeks. Another reason this is not a likely explanation: I’m not friendly enough with any of my neighbors that they would be taking care of my plants.

3. They were knocked over and broken and the culprit disposed of the evidence.

Halfway up the hill this morning this one came to me. I turned around to check the trash cans. Tonight is trash night, after all, and I couldn’t let any clues go into the back of the garbage truck. There were no shards of cheap flower pots in our communal barrels, nor was there any dirt next to Bertha.

Rodents don’t eat ceramic. Or watering globes. So that’s out.

5. I brought them inside.

I have enough self-knowledge for that to be the first explanation that came to mind. Could I have taken them in and forgot? Before I even shut the door behind me I turned around and looked all over the apartment. Nope, no basil, no chives.

Why would a prankster go behind our apartment building and steal chives? They don’t look like anything you could smoke, and they’re not worth anything. Sure, they were right next to the window a burglar crawled through five years ago (which is now firmly locked), but you’d think a thwarted criminal would just move on to the next target rather than take out his/her frustration by absconding with my garnishes.

If you happen to see a few plants that respond to Bert and Ernie, please comment and let me know where to rescue them. If you see something, say something. You can rest assured if I see something I am saying EVERYTHING.

This entry was posted in apartment, burglary, food. Bookmark the permalink.